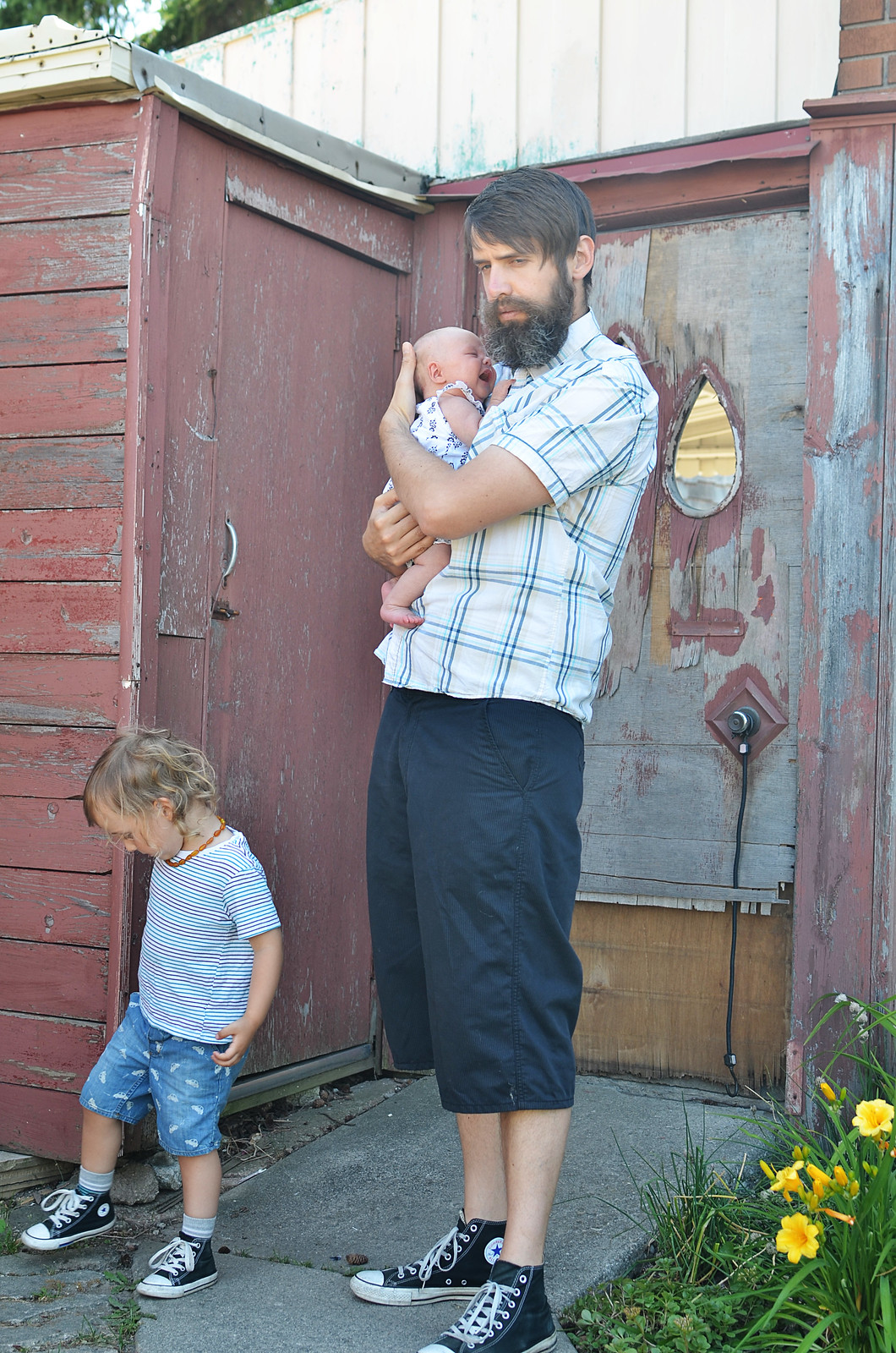 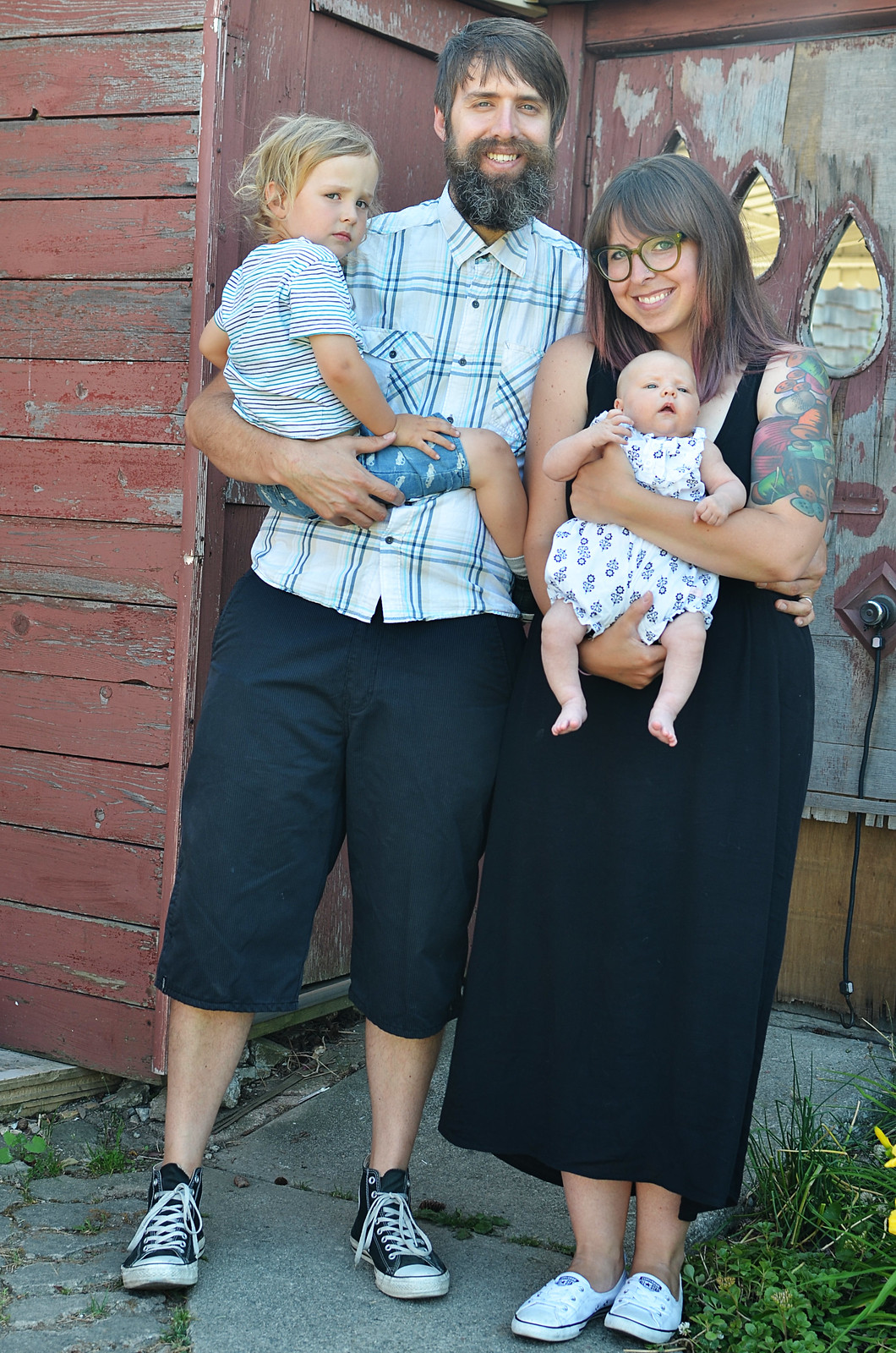 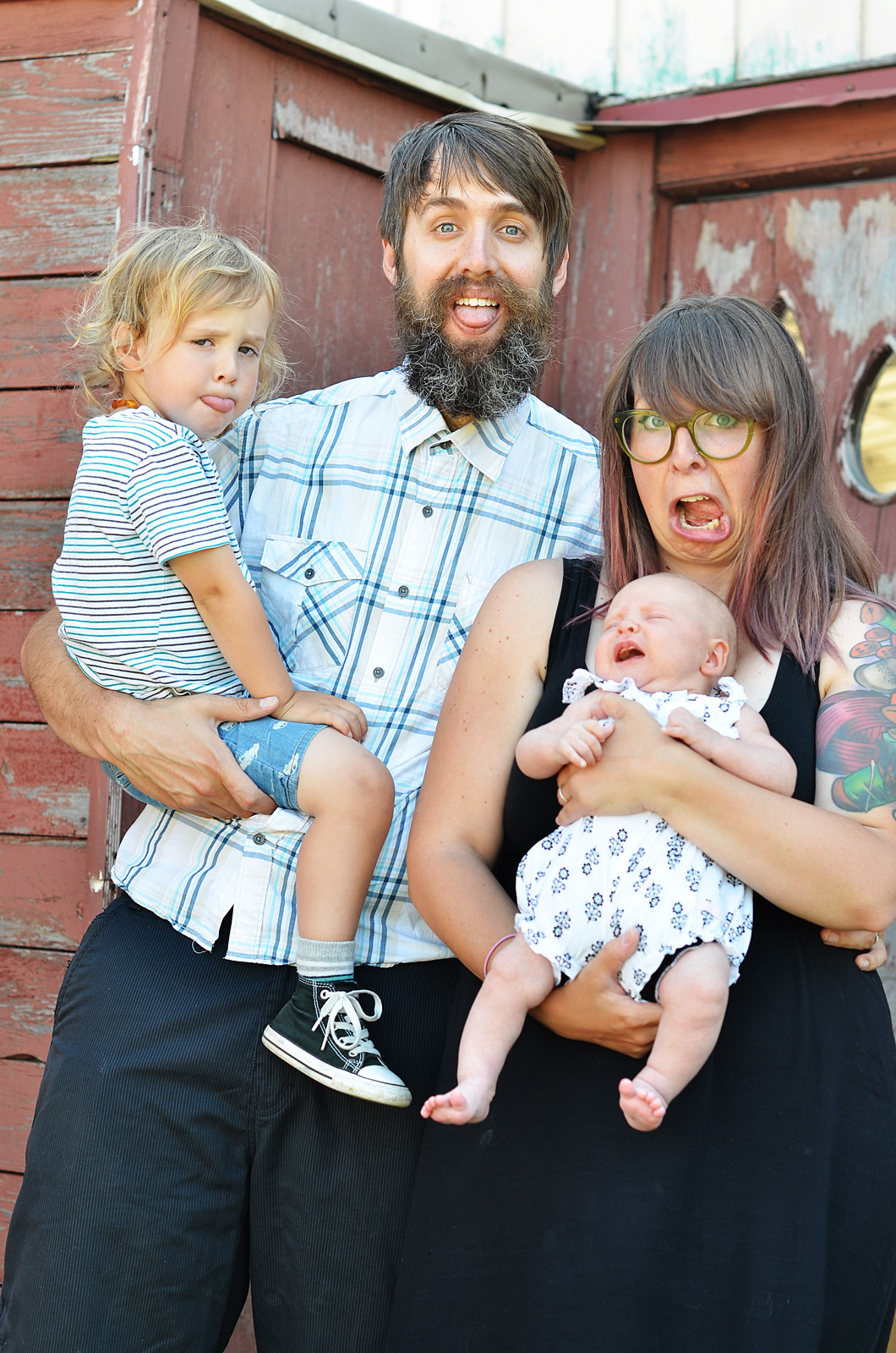 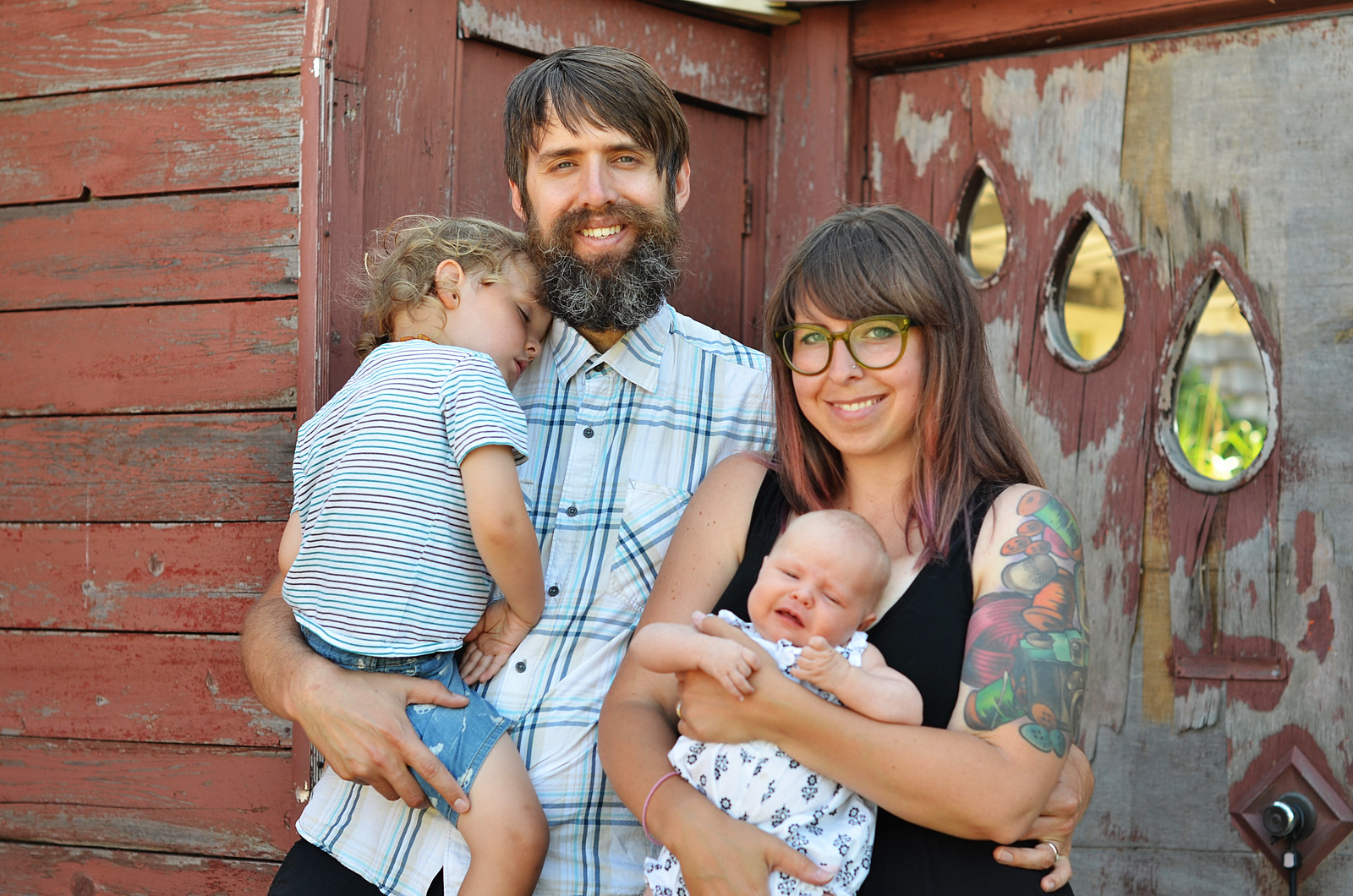 This past year we were all ready to go to the park where we usually take our photos but then it just seemed too difficult to manage. I remember Olive being fussy and Milo being really tired. We decided to quickly take some photos in the backyard instead.

Milo ended up falling asleep while we were taking photos and coming down with something the next day. This is also an accurate depiction of Olive at that moment in time. She cried a lot. She was grumpy 90% of the time she was awake for the first six weeks or so and I guess she wanted to represent that in these anniversary photos. This is an accurate look at our lives at the time.

♥elycia
Posted by elycia at 1:37 PM 3 comments: Links to this post

Email ThisBlogThis!Share to TwitterShare to FacebookShare to Pinterest
Labels: wedding

I really want to share Olive's birth story as I shared Milo's. I just don't have a mind for remembering details even from very important events so it's important for me to write this stuff down somewhere. It's been ten months since Olive joined the outside world so let's give this a go and see what I can remember from the day she was born.

I'll start by sharing a bit about my pregnancy with Olive. People tell you that every pregnancy is different and logically that makes sense, but there was always a part of me that thought my pregnancy with Olive would be pretty much the same as Milo's. Ha! They were sooo different. Just a quick summary: I felt less nauseous with Olive but threw up so much more, dealt with way more heartburn, was much more emotionally stable in that I felt very much like myself and didn't cry anymore than usual, but experienced more anxiety and, the strangest one for me, was pregnant 4 weeks and 4 days longer!

Since Milo was born at 37 weeks and 1 day I knew it was very possible that Olive could be early as well. I also understood that it was very possible that she would not be early but I never expected to end up 41 weeks and 4 days pregnant. I made sure that everything was ready early in case Olive did decide to be born as early as Milo, which lead to a feeling of, ok...I'm ready...are you coming yet? As much as my mind knew that babies come when they are ready, as the weeks went by and Olive was still happily hanging out on the inside, I started experiencing a lot of anxiety. I talked to my midwives about it but, being me, I initially downplayed how I was feeling because logically I knew that things were happening the way Olive needed them to. Once I passed my due date and was approaching 41 weeks I ended up having an actual panic attack. One of my midwives thankfully came to see me and we talked and I felt so much better but I was so worried about not being able to give birth at home, having to be induced and everything that could come along with that that I still had huge amounts of anxiety daily until Olive was born at 41 weeks and 4 days. I know, I know, it's bad for the baby, chill out Elycia...I could not.

Sharing all of that is just to say that even though I had confidence that my body knew what it was doing I also had a very hard time convincing myself of that very same thing. I didn't experience those types of feeling with Milo. I always felt sure that my body was doing what it needed to do and I was completely mentally prepared to go 10 days overdue since he was my first child. My feelings through my pregnancy with Olive was such a strange thing to go through but looking back I'm grateful to have had the experience of a baby coming earlier than expected and later than expected because I gained more understanding about what women on both sides of the spectrum go through emotionally. It's intense!

Ok, back to the birth story. Olive was born on Friday May 13th so I will just rewind now to Thursday May 12th. I was still extremely anxious about what might happen if Olive still hadn't shown up by 42 weeks, so I was looking forward to Thursday afternoon when I would be going to see my midwife for a check and a non stress test. We confirmed what everything else had told us so far, that Olive was doing fantastic and was very happy hanging out on the inside. The test gave me a lot of peace of mind because I was able to tell myself that as of right now, I had absolutely no reason to worry. I felt more relaxed than I had in a long time. That night Ivan and I did all of the things that were supposed to help Olive arrive if she was ready, including eating the spiciest Indian food I knew about.

That night I woke up much more than normal to use the bathroom and I wasn't sure if the discomfort I was feeling was from the Indian food or if labour was finally starting. Ivan had been working from home all week in case I went into labour and by about seven or eight in the morning I called my mom to ask her to come over to play with Milo just in case I was actually in labour. When I went into labour with Milo it started with my water breaking so I wasn't really sure what it was like when labour started a different way. My contractions were coming at regular intervals but I still wasn't totally convinced. I also called my midwife sometime in the morning to let her know that I thought I might be in labour. She told me that if I gave birth before five or so that she wouldn't be able to be there because she had been up all night at a birth.

During all of this I was doing things to help progress my possible labour. I bounced on an exercise ball (which I liked even though I hated it while I was in labour with Milo), kept moving and even finished a book I had been reading. You know how much book reading helps progress labour, right? Ha! I was starting to think that I was pretty sure I was in labour but the thing that confused me was that in between contractions I felt totally fine. I remembered having to concentrate the entire time I was in labour with Milo, not having any concept of time, being in my own world but this time, when I wasn't having a contraction it just felt like any other day.

Sometime before we called the midwife back my mom decided to take Milo out for a while. Our plan was to have him there for the birth if he was interested but it ended up that I didn't really love having him around while I was having contractions. I didn't want to be disturbed while I was dealing with one and turns out you can't just ask an almost three year old to give you a minute while you work through a contraction.

Finally around noon I asked Ivan to call the midwife back and start filling the birth tub because my contractions had gotten stronger. Everything still felt very manageable but I definitely noticed a change. When the midwife arrived and checked me I was already 6 cm which was finally proof enough for me that I was actually in labour. She told me that I could get in the pool whenever I wanted so once it was full I hung out in there, working through contractions without too much difficulty and then relaxing in between when I still felt totally fine.

Eventually the contractions picked up to a point where I didn't have as much of a rest in between and I remember thinking that they were much more painful than I remembered with Milo. I always described my contractions with Milo as intense instead of painful but with Olive I would definitely throw the pain word out there. I guess at that point I was going through transition and my midwife could hear that things were picking up so she came into the kitchen with Ivan and I. I had a contraction where I felt like I might be ready to start pushing so my midwife was going to check me and then call the other midwife who shows up when you're ready to push. Before she could check though I started getting another contraction and asked her to wait until it was finished before checking. Once it started I told her that I had to start pushing so she quickly sent the other midwife a message to come.

Once again to compare, when I was pushing with Milo I didn't really feel anything. I also pushed for quite a long time, more than an hour. With Olive, once I felt like I had to push, I could feel everything (EV-ERY-THING) and I remember thinking, "there is absolutely no way I am doing this for an hour!" I pushed Olive out (very loudly with open windows...our neighbours who were sitting in their backyard went inside) in one and a half contractions which took less than two minutes. I felt her slide out (which I didn't feel with Milo) so that was kind of neat. I think my water broke right before Olive came out because I remember saying that I feel like something is coming out right before she came out.

Olive May was born at 2:19 pm, 8 lbs 1 oz and 20 inches long. Olive came out alert, noisy and I was able to just hold her for a long time before cutting the cord and getting out of the pool. We were so glad that she finally decided to join us and once we were snuggled up together in bed, Milo got to meet his sister. I honestly don't remember exactly what happened when he saw her for the first time but he knew she was coming and was happy to see her. 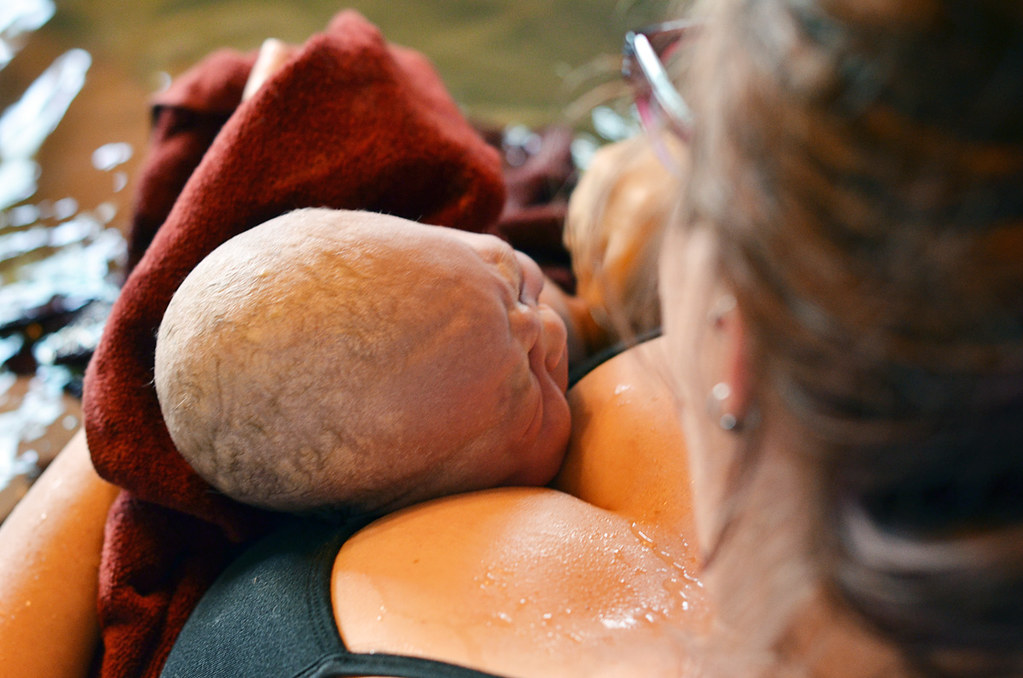 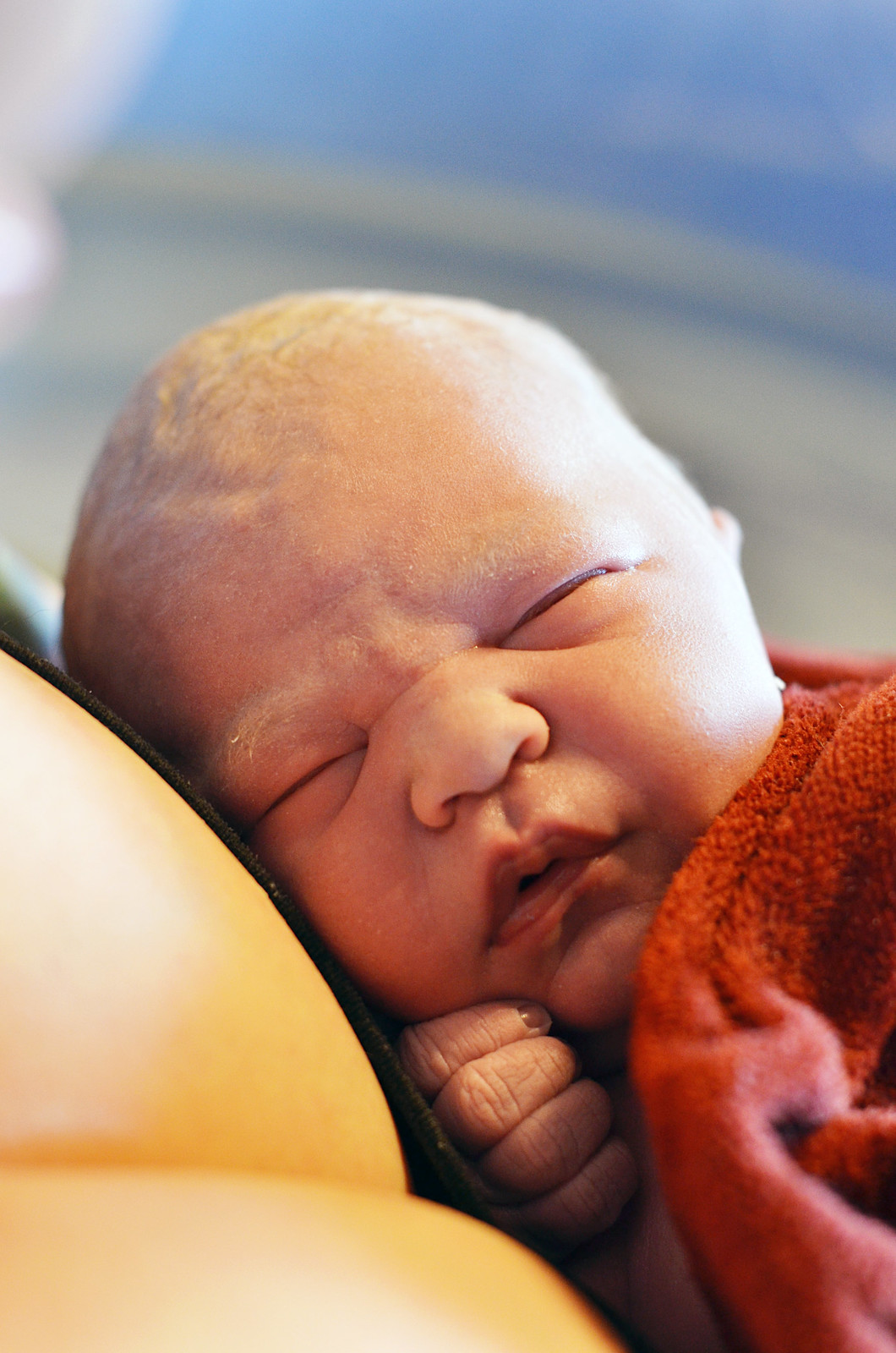 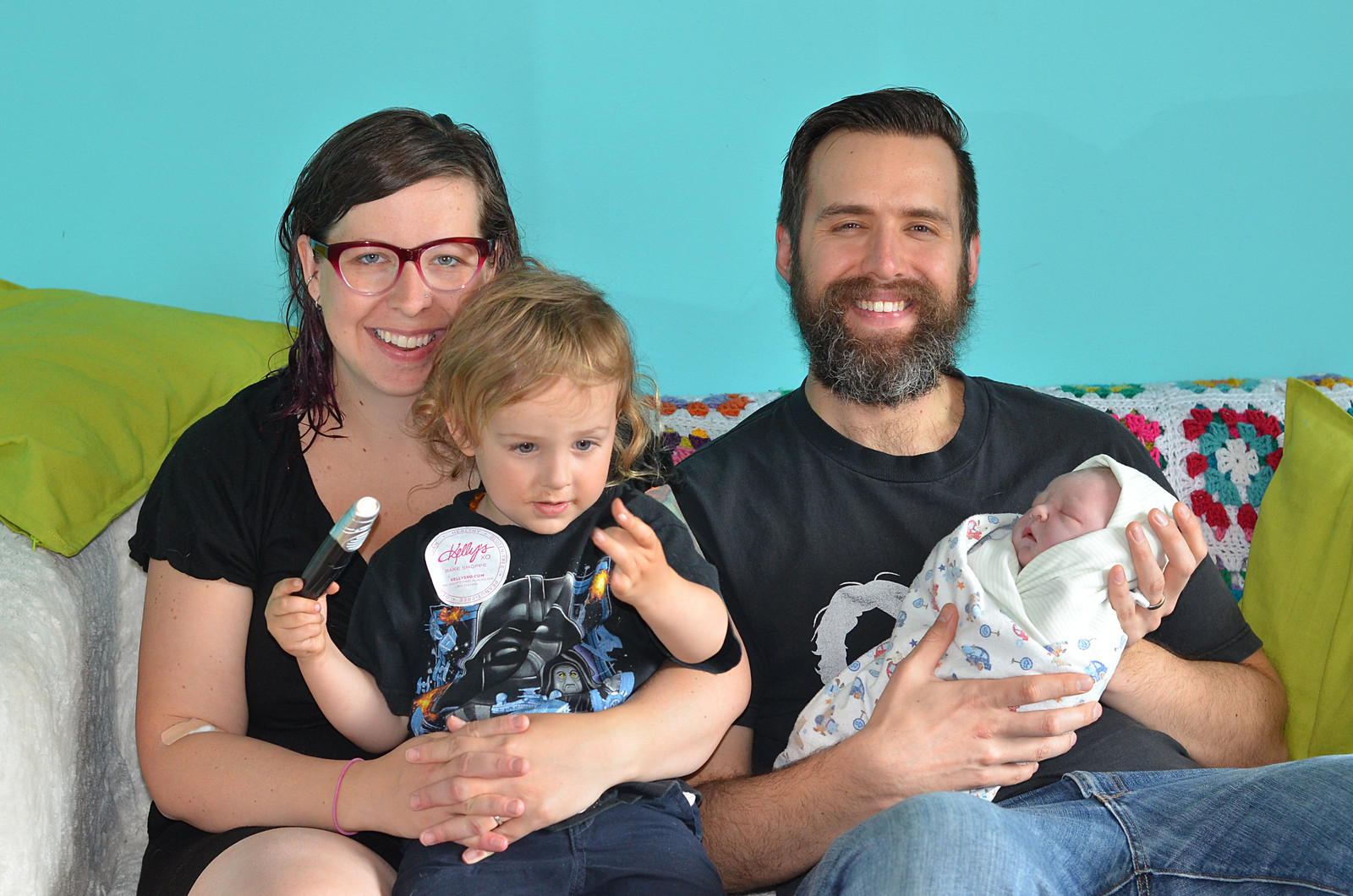 I'm sure I've left out many, many details that I would have liked to remember but that's what I get for waiting so long to write this down!

Olive and Milo had very different pregnancies, labours, births and so far, are basically opposites of each other. It is so interesting and I really want to talk more about it here. We'll see!

♥elycia
Posted by elycia at 9:21 PM 2 comments: Links to this post