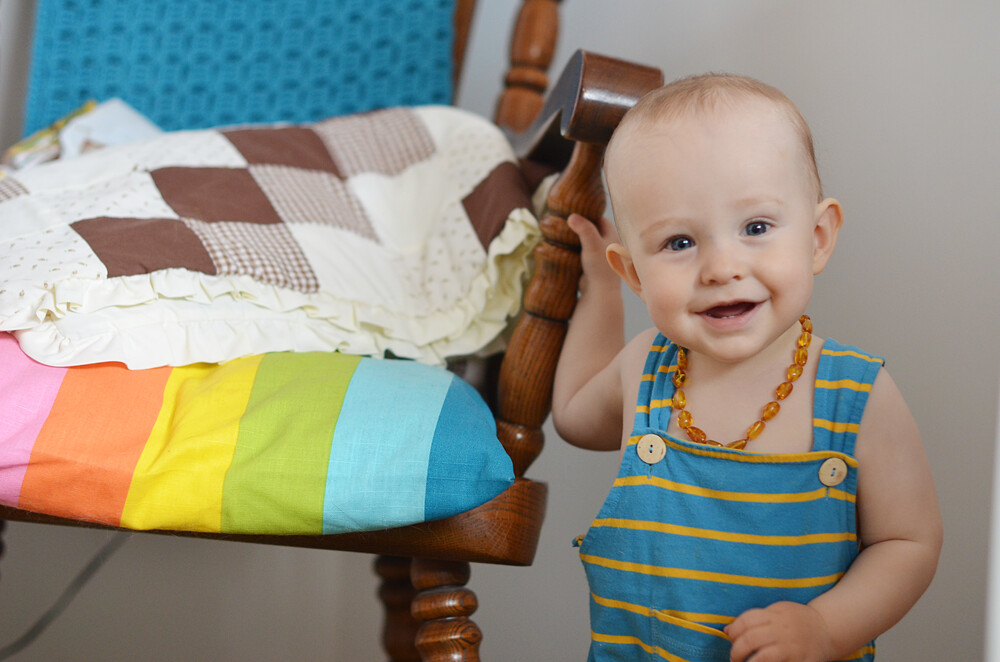 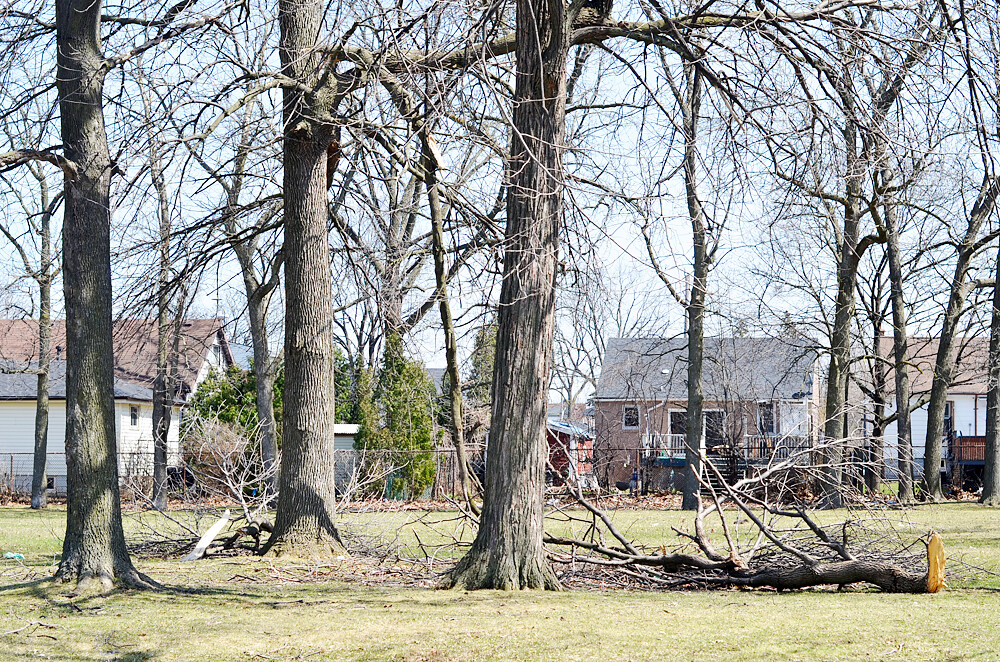 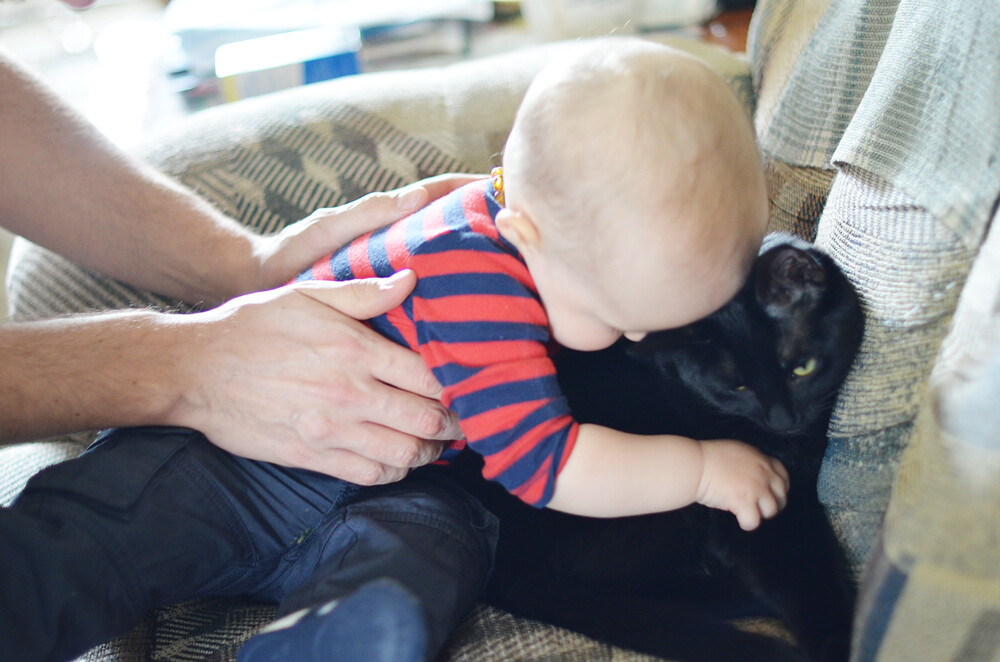 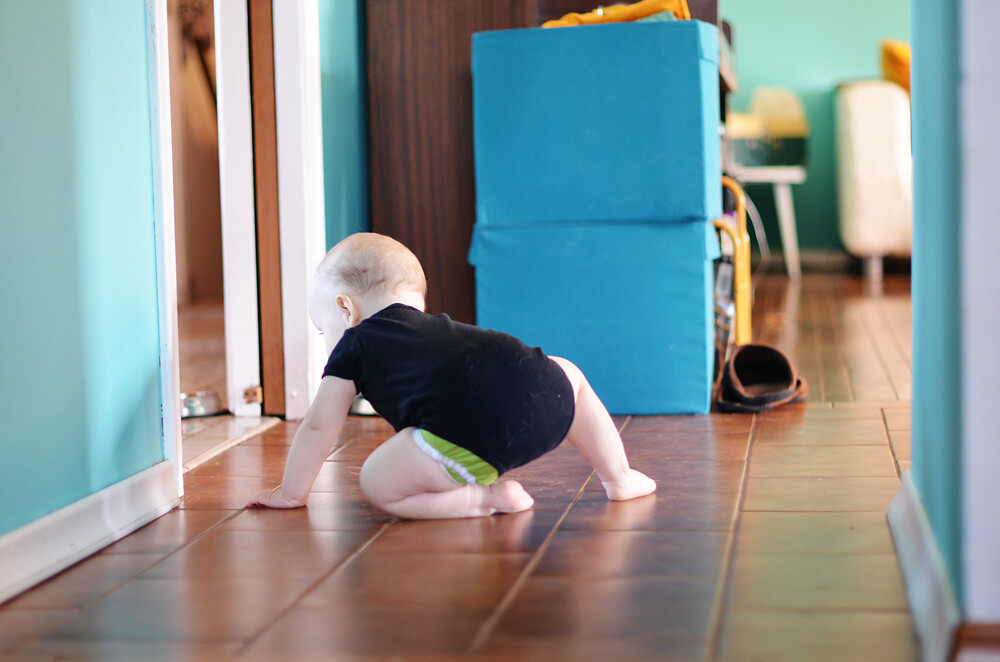 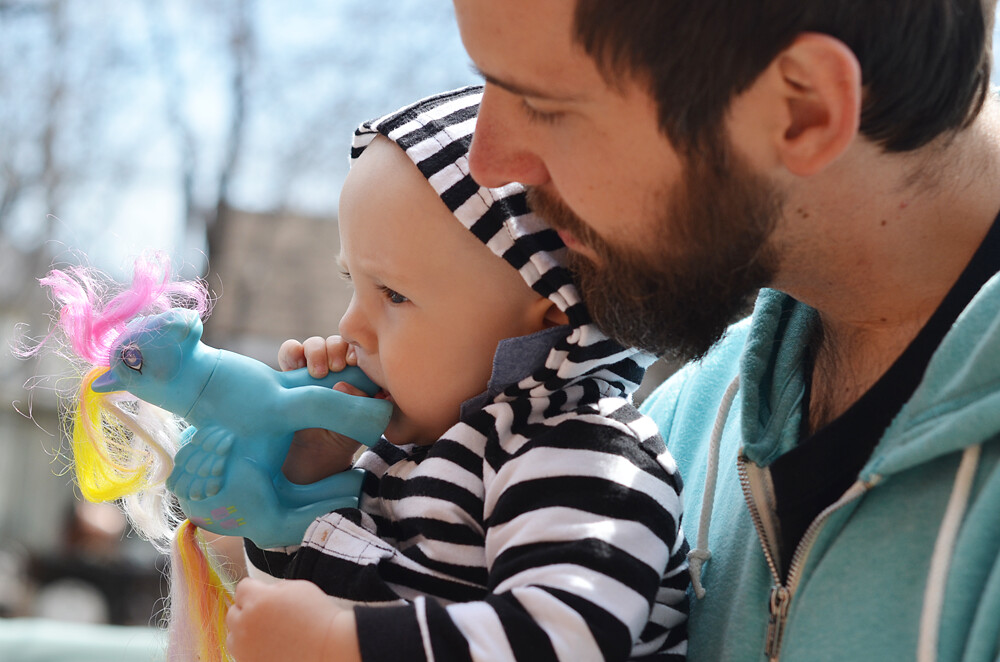 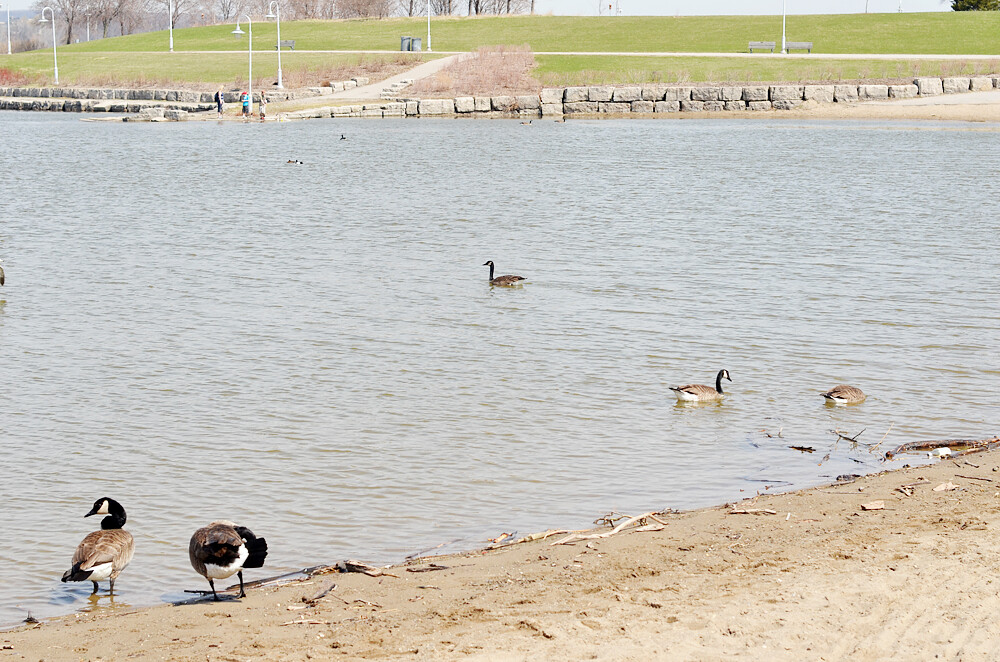 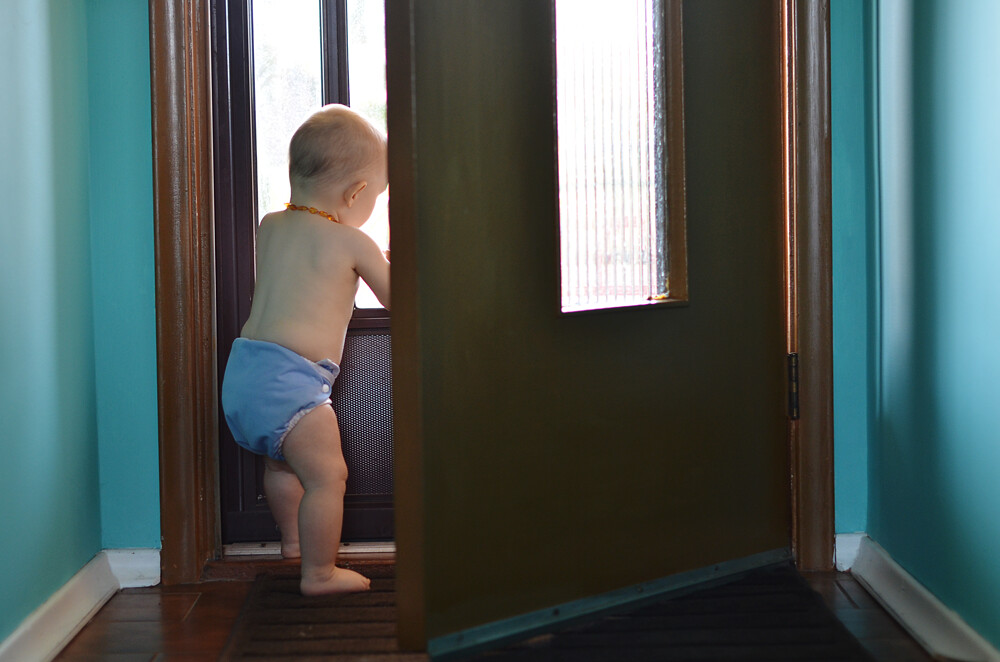 Yeah, Milo is so over these photos. It's about the memories, not how awesome the photos are. Milo is pretty hard to keep still, especially on his back which makes changing his diaper a real treat these days.

Ok, so what is this baby up to? Milo took his first official steps at 9 months and 1 week exactly and then started walking longer distances while we were in Seattle. Milo can totally walk on his own now but usually prefers to hold my hand so that he can run. This kid wants to go fast! I think I'm in big trouble.

I think I said two months ago that Milo was about to get a third tooth but now I'm positive that that is the case. His top two teeth are right there about to pop through. Milo deals with teething pretty well from what I've heard from other moms. These teeth are making him wake up a lot more than normal in the night but other than that and a little extra grumpiness he's fine. People often ask about the amber teething necklace and I say I'm on the fence about whether it helps or not. One thing that I have noticed though is that Milo doesn't really drool like he did when he wasn't wearing it. So, there's that.

I think that's all that is new on the baby front. Oh and of course, as always, I can't believe how quickly the time is flying or how much we love Milo. It's pretty nutty.

What I Wore :: This Used to Feel Normal

It is strange to look at these photos of an outfit that I would have been 100% comfortable in before and kind of feel like I am wearing a costume. I have worn all of these items many times before but it has been so long since I've put together an outfit like this that I felt a little strange. I already knew my style had changed but this really confirmed it. I would love this on someone else but it just doesn't feel like me anymore. It is really strange to feel this way but I guess it makes sense; things change. So why am I posting this? I wore it for the whole day and I do think it is a cute outfit so I'm sharing. Also, I painted my nails so I'm pretty impressed with myself. As you can see, I casually placed my hands on my head so that you could check out the paint job.

I really do like these cat tights but I think they might work better on someone with legs that are a little less large and in charge. I am really testing the tensile strength of this bracelet...er pair of tights. They are super cute though so I'll probably still wear them once in awhile.

Just to be clear, the tone of this isn't gloomy. It's casual and I'm just making observations. Anyways, I really hope you are all enjoying your day! Have a great one.

This post contains affiliate links which help me run my blog and contribute to my family. For more info on affiliate links click here. Thank you for your support!
Posted by elycia at 7:00 AM 24 comments:

I still have lots to document from Seattle but here is a little round of random shots from our first weekend there.

This is just a neat looking building. There were tons of buildings with old signage painted on but I didn't take photos of as many as I would have liked to.

A heart, a maze, and the Children's Museum near the Space Needle. I really wish we had a cool Children's Museum here in Hamilton. The one in Seattle was great! It had so many different sections including a place to play with instruments, a kid sized grocery store & cafe, and so many more neat things!

We had a good Easter weekend. We got together with some family (which we actually do every weekend) and we have a bigger family dinner tonight. It is really nice to see Milo interacting with his grandparents more lately. He is getting a lot more comfortable with them and will hold their hands and walk them all over the place. I mean, he was ok with them before but now he seems to really enjoy them which is awesome. Oh yeah, also, Milo is exactly 10 months old today!!

I hope you all had a great weekend!

The first place we visitied in Seattle was Pike Place Market. We stayed at the Belltown Inn which was only about a 10 minute walk from the market. On our first day there we were up really early so we headed to the market for breakfast and just walked around. Since it was so early it was really peaceful and not busy at all (like we would soon find out is the norm for the market).

These photos were taken over a few different market visits. The last photo shows some beautiful mountains which I think are the Olympic mountains. When I saw them a few days after our first visit to the market I wondered how I didn't notice them before. Well, it was cloudy the other days and so the mountains were hidden until the sun came out. On sunny days we saw mountains all over the place! Seattle is so beautiful.

During our time in Seattle the market was kind of my home base if I was out walking around. I knew there were washrooms there with change tables, snacks and of course a photobooth. All very important things.

99/365 :: Did I mention that Seattle is beautiful? As I was leaving this rocky beach I saw a sign saying to leave seal pups alone if you see them. I freaked out because it would have been so neat to see a seal pup!! 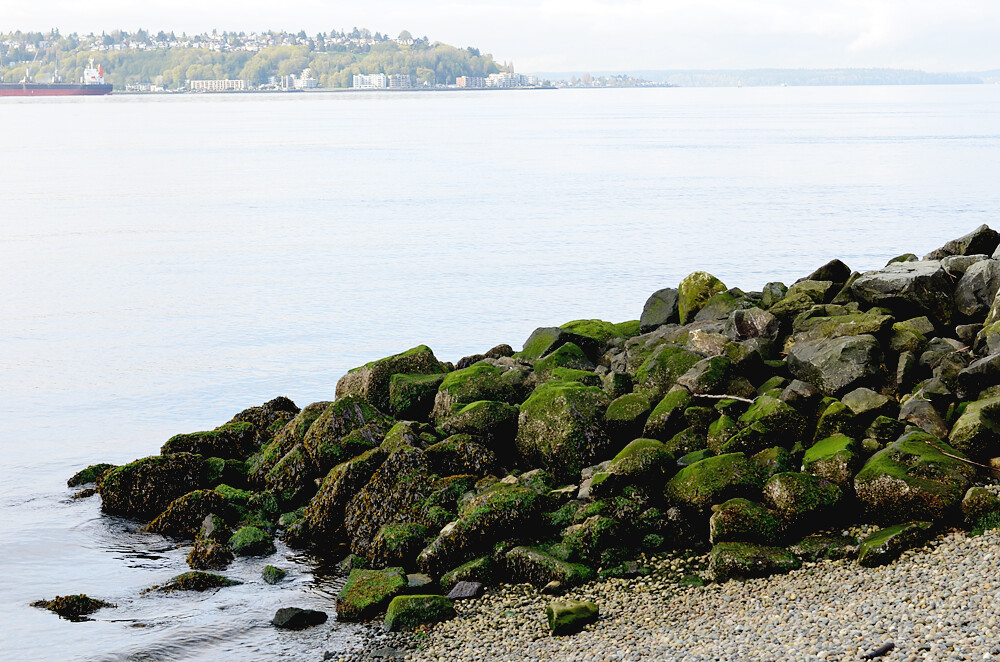 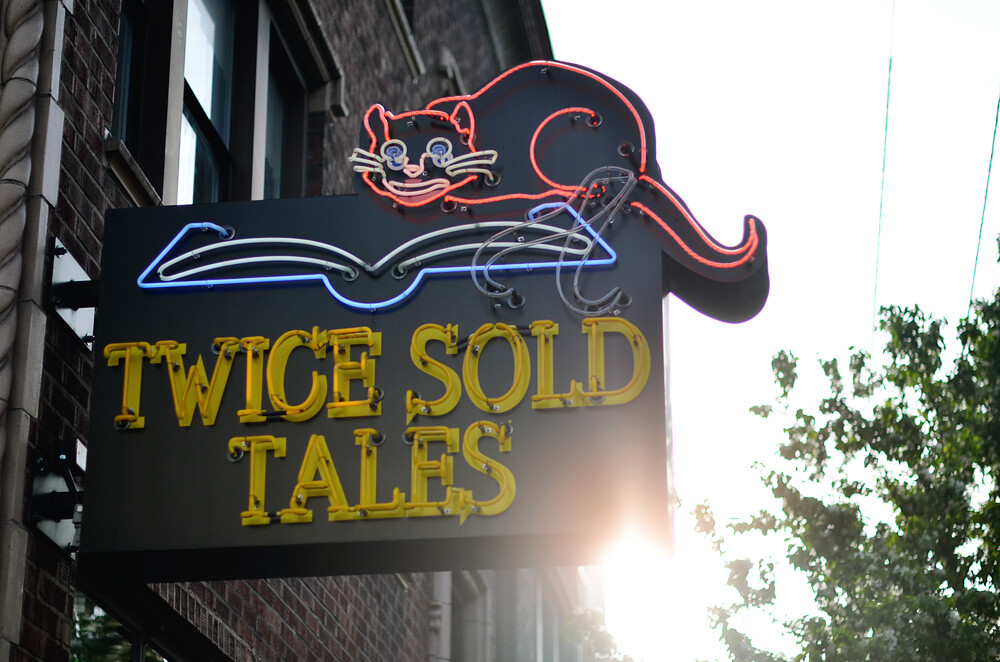 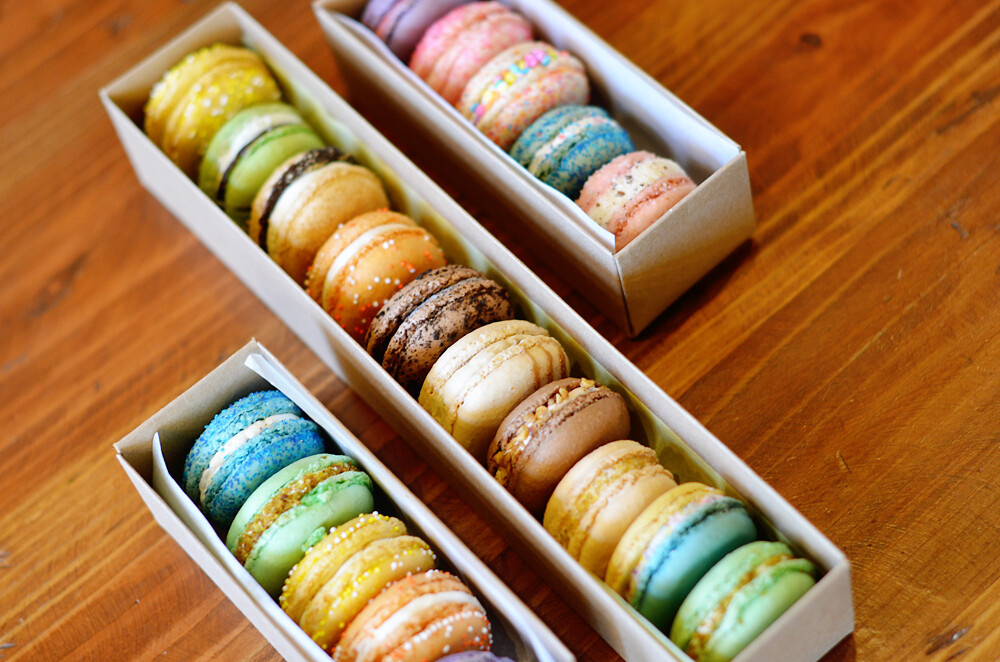 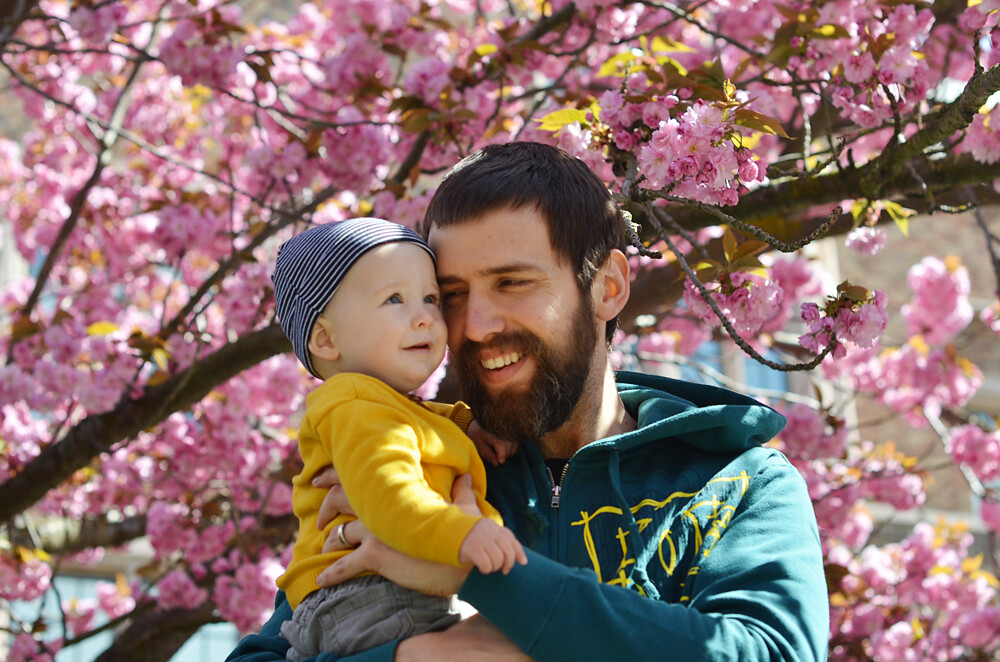 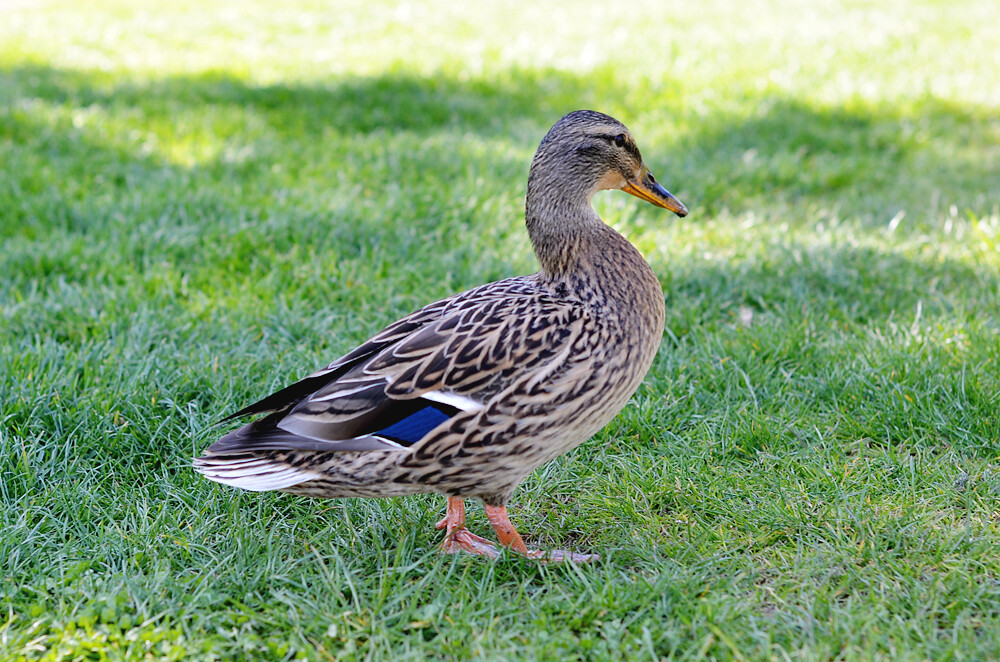 102/365 :: Milo is starting to consistently smile for the camera and it is adorable. 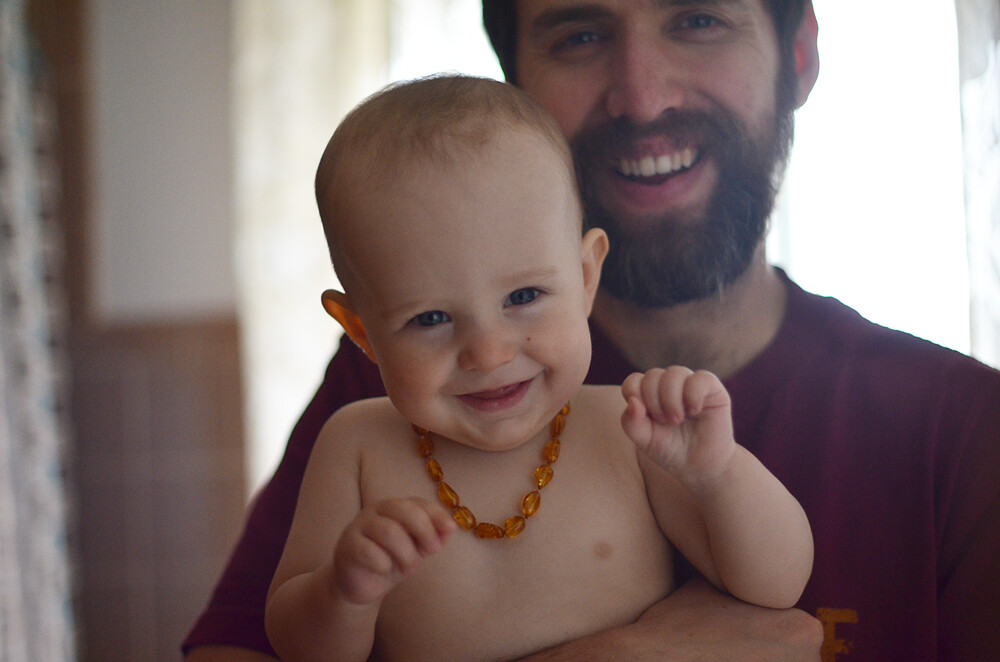 103/365 :: Oh yes, this is happening. Full House was on at night around the time we were going to bed so we watched a few episodes. We decided that we needed to pull out our DVDs once we got home and watch everything. I don't own the last season though. Once the twins were born that show went downhill. Actually, season one is definitely my favourite so I guess for me it was all downhill after that. Whatever, I love Full House. 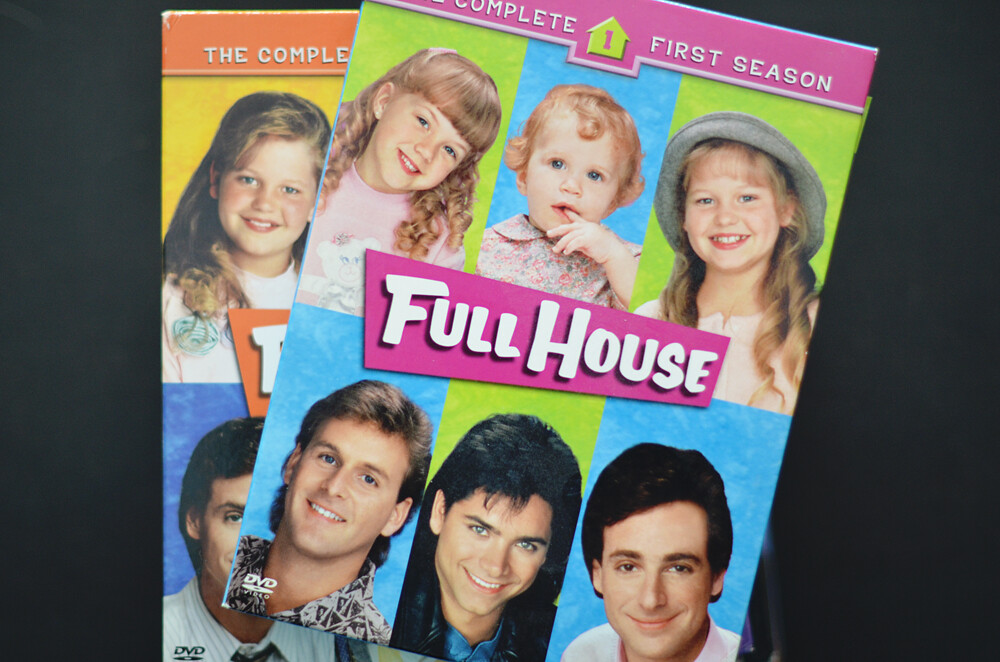 Ahhh, all caught up again. I have so many posts that I want to put together from our trip. It might get a little boring for you guys but I don't keep a journal or any other kind of scrapbook and I really want to document the trip. Or it might not get boring, it depends what you're into. I'm off to edit some of my favourite photos while Milo snoozes. I'm hoping he is back on track with his bedtime but this may just be a before bed nap like last night.

Have a great Wednesday! 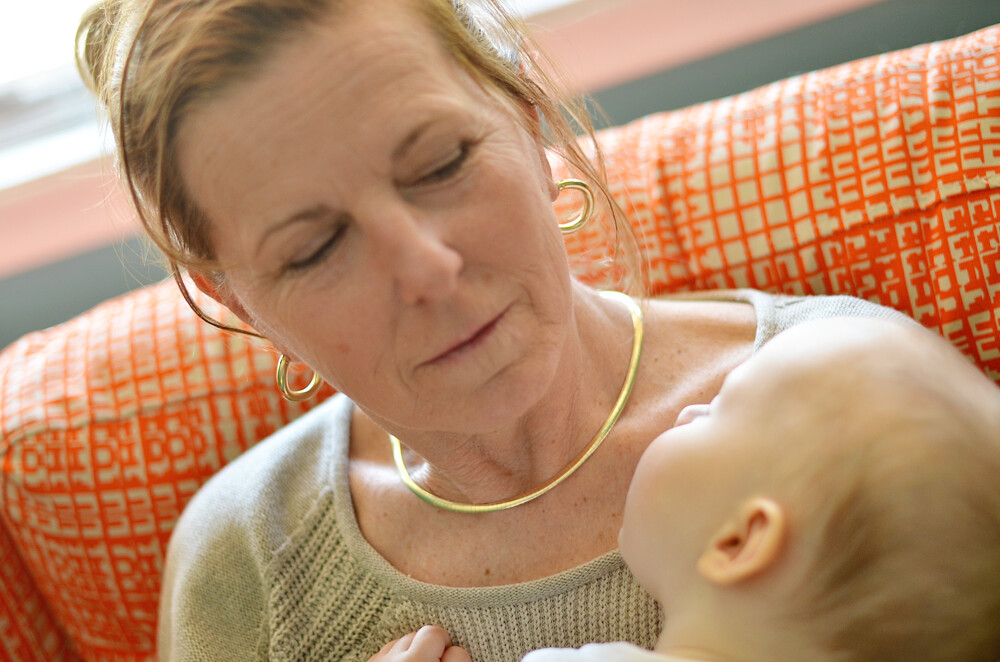 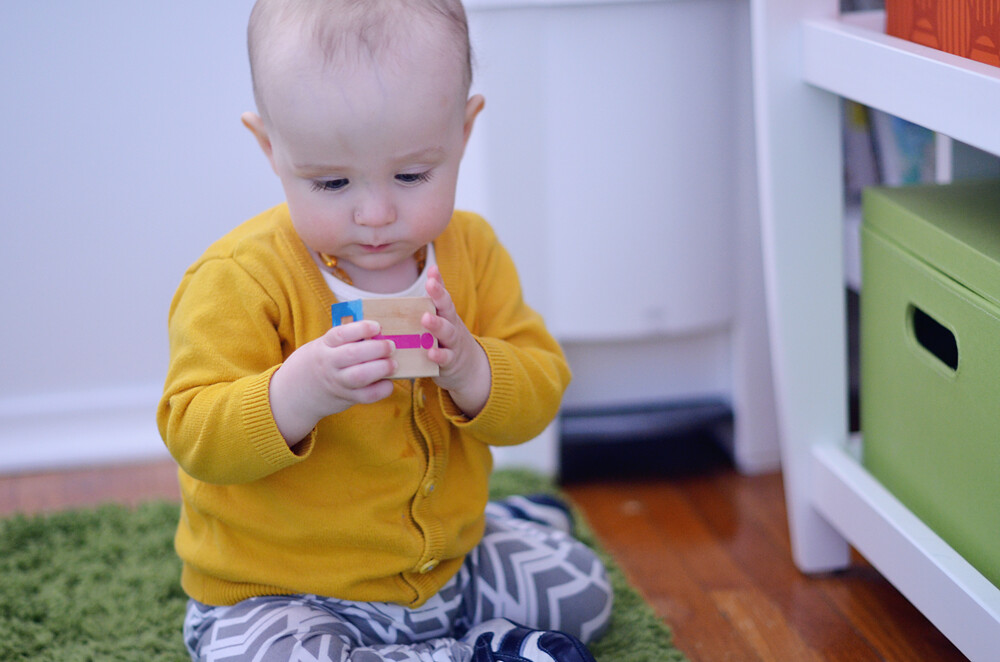 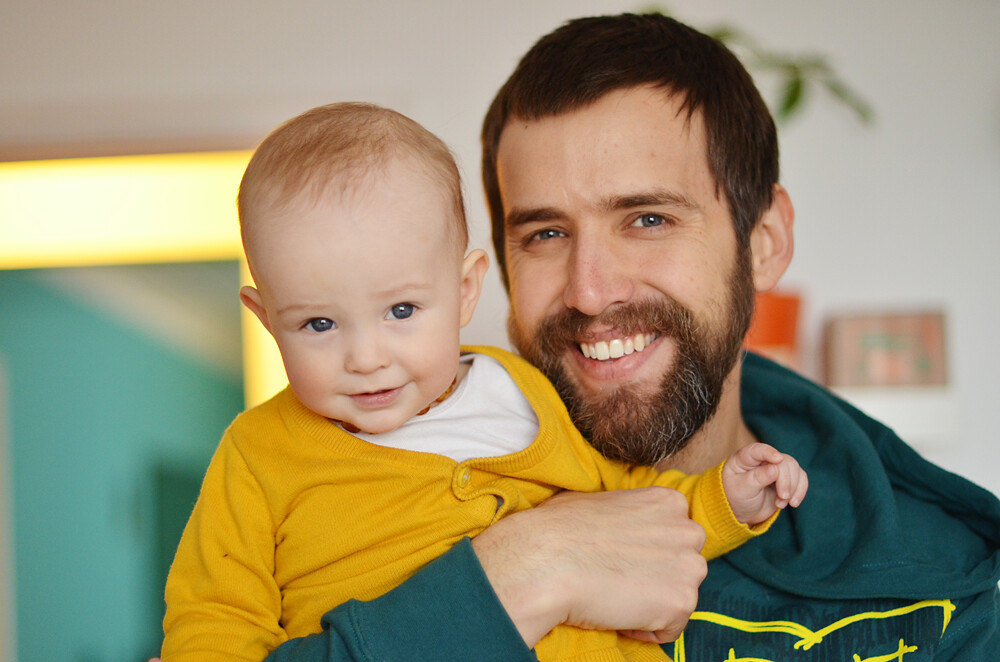 95/365 :: The gum wall! I thought it was so neat and the alley smelled like bubble gum...which makes sense because it's everywhere. 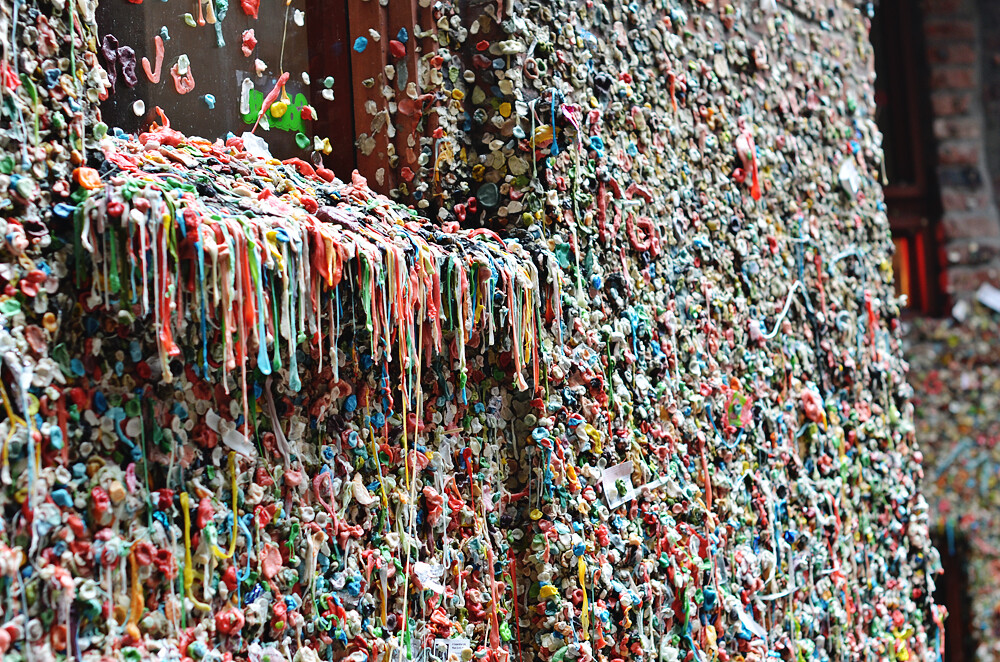 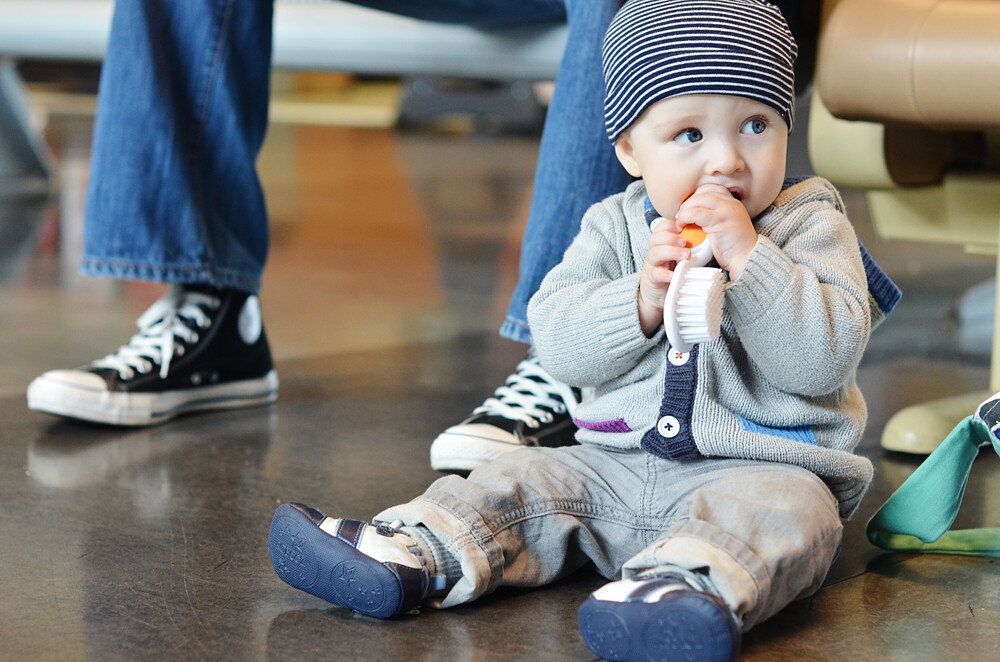 97/365 :: I need to devote an entire post to the cherry blossoms. They were beautiful. These were at the University of Washington. 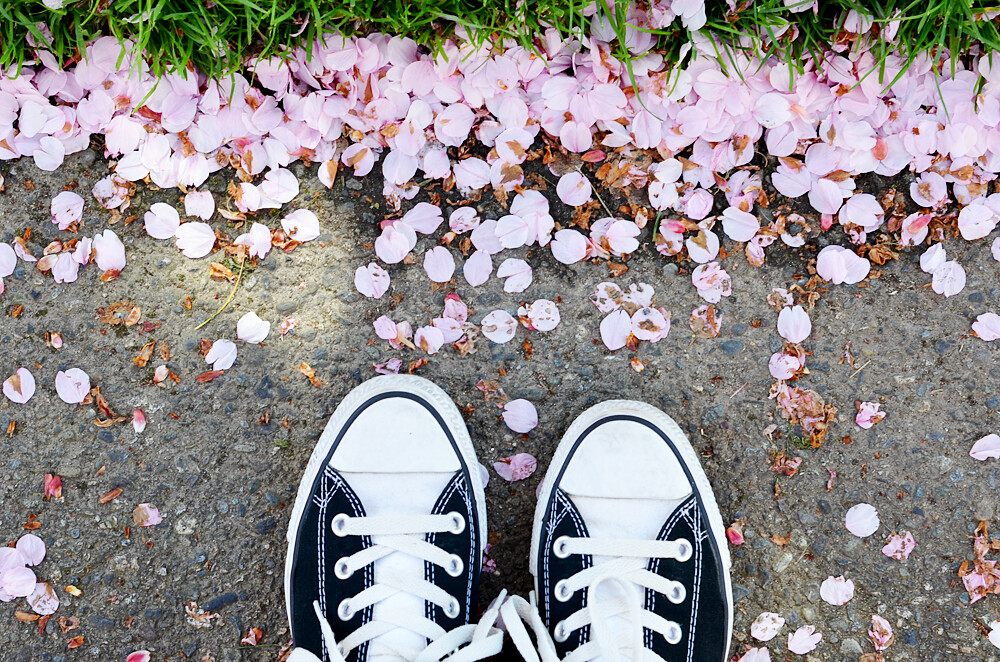 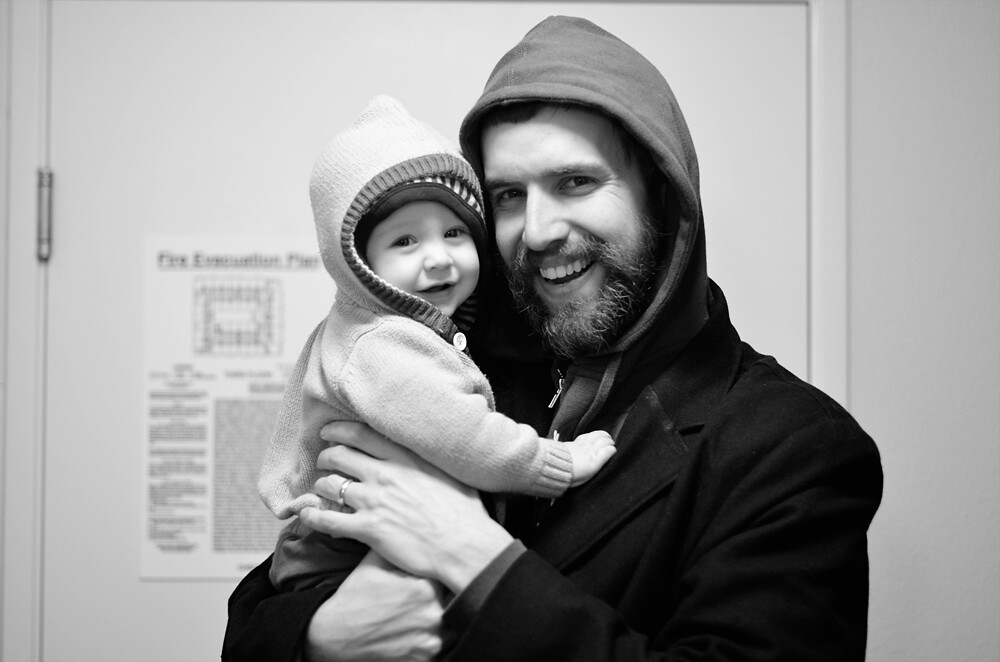 Good afternoon everyone! We are all messed up time wise around here. We had an amazing trip, which I'm sure I will tell you all about, but for now here is another installment of my 365 project. Most days it was really hard to choose a photo because there were so many. Being out of the house is amazing and I really want to plan more adventures around my own city. Actually, I got the idea to pretend I'm a tourist and ask what is there to do in Hamilton. So, any Hamiltonians out there, what is there to do in Hamilton?

I hope everyone is having a good week so far. I am not even going to comment on the weather today. Who am I kidding? Yes I am. It snowed. That's all I will say about that.

85/365 :: I recently brought up a bunch of different CDs to listen to on the CD player in Milo's room. Also, Ivan just pointed out that this CD player looks like it has a face. I had never noticed that before! 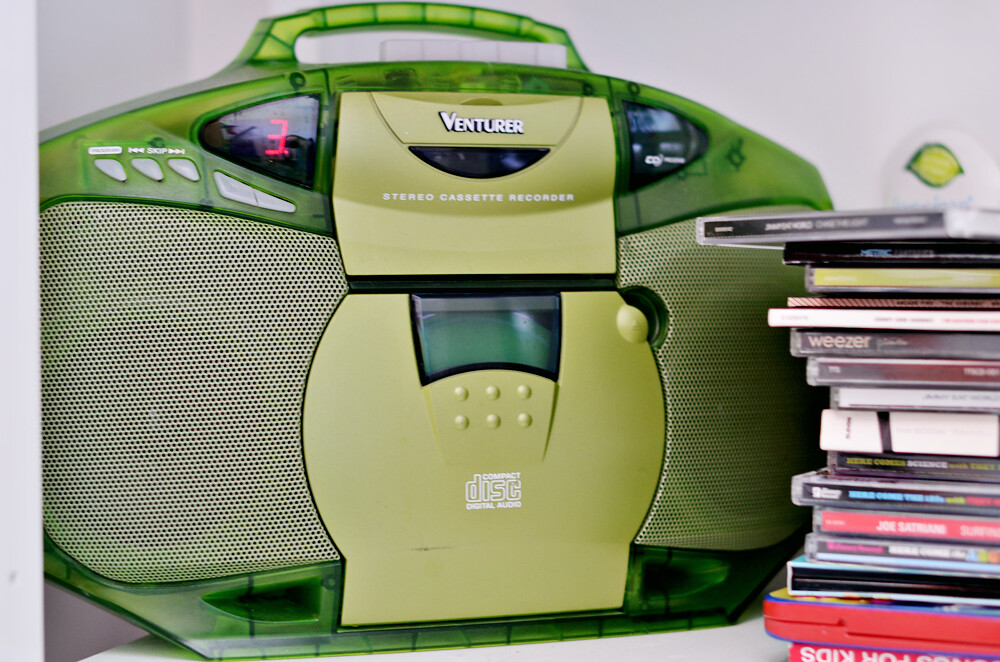 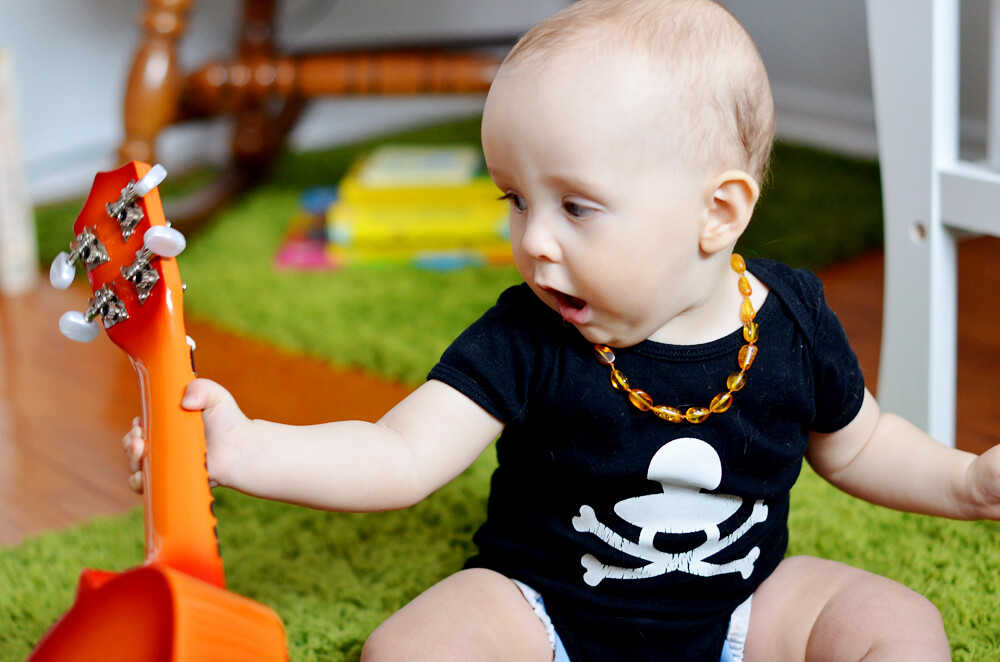 87/365 :: Jamming again. Milo likes to practice all of his instruments. 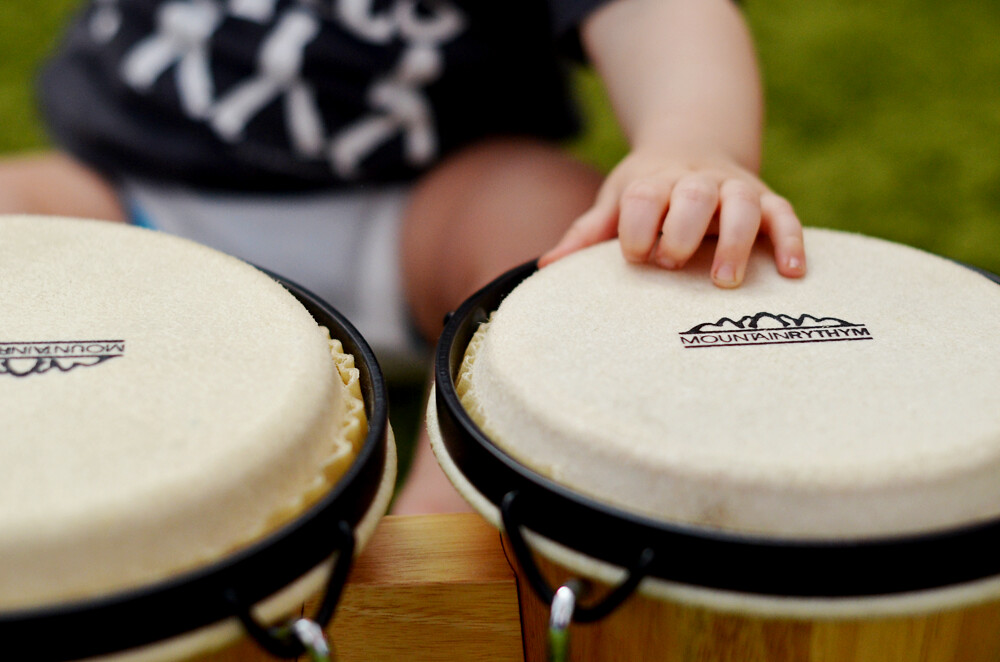 88/365 :: We were visiting Ivan's Dad and Milo picked up these chips just to hold onto while he walked around. He really prefers to carry something as he's walking. 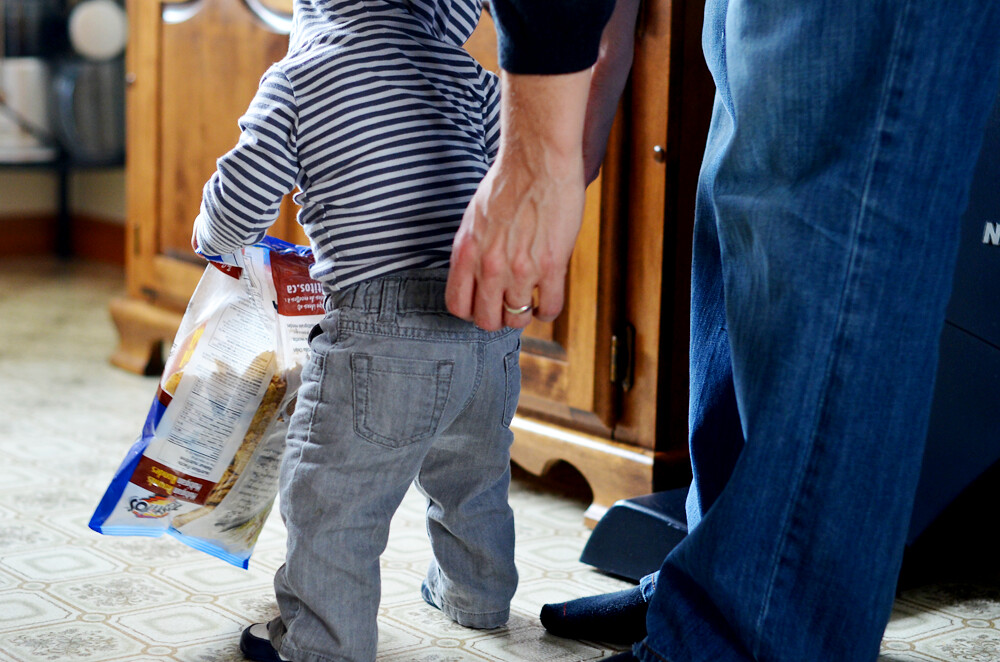 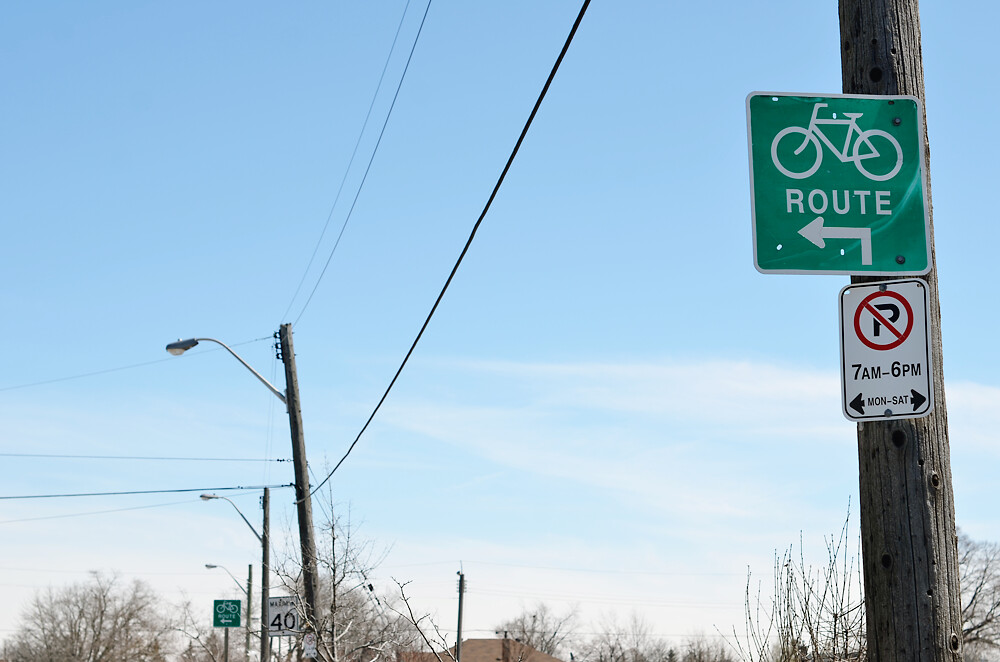 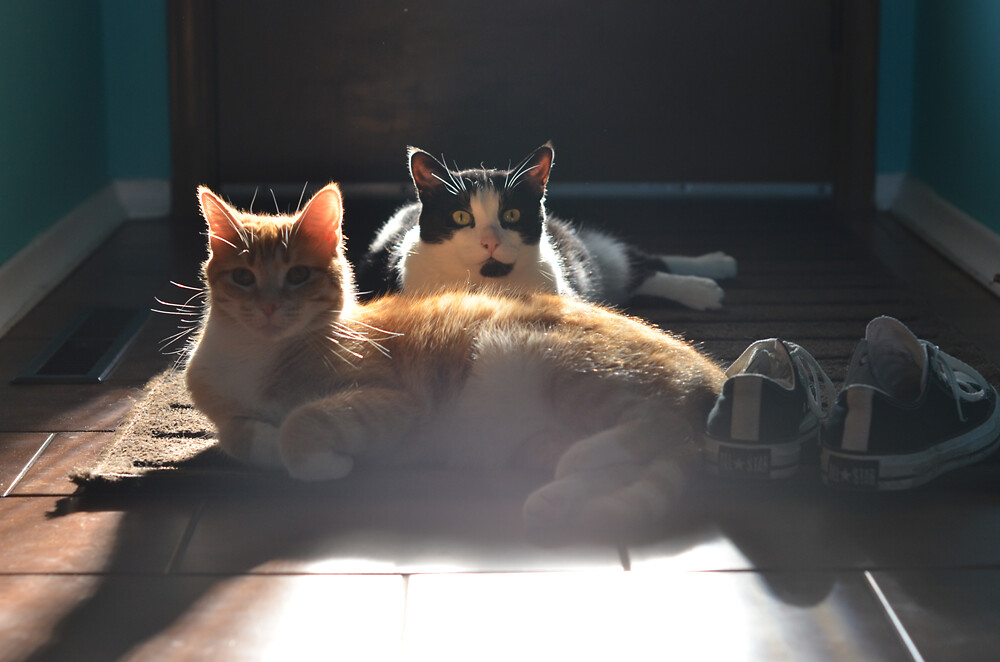 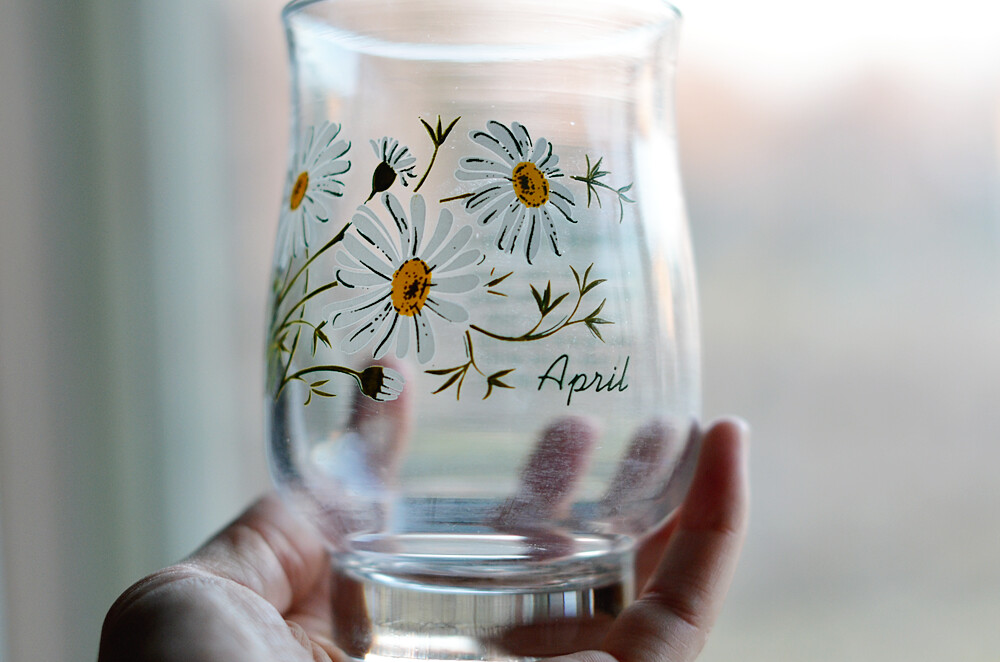 We are currently having a great time in Seattle. I'm not 100% sure that I'll be back again this week because I'm cheap and don't want to pay for Internet everyday so the updates might have to wait until we get home. What is with places not having free WiFi?! I will try to pop in again though. We have already done so many things and I'm really enjoying the city so far.

I am really tired from walking around all day so I'm off to bed. I'm typing this Monday night (in case you are wondering why I'm going to bed in the morning). Have a great day!